Summary: New poll shows KMT continues to lose support. 2020 PLAAF incursions highest since 1996. But up first, Taipower to own up to losses at fourth nuke plant.

Taipower to own up to losses at fourth nuke plant

The Minister of Economic Affairs has announced that losses associated with the never finished Fourth Nuclear Power Plant would be recognized by Taiwan Power Co (Taipower, 台電) after a referendum next year.
The Taipei Times is reporting the following:
The losses associated with the ill-fated project are enormous.
According to Taipower’s annual report, the costs associated with the power plant, including the transportation and disposal of the fuel rods, is NT$285 billion (US$9.9 billion).
Citing an unnamed source who is a “senior member of the ministry,” the Chinese-language Liberty Times (the Taipei Times’ sister paper) yesterday reported that writing off the power plant would put the state-owned utility “on the brink of bankruptcy.”
“Taipower executives are taking the easy way out, but in the process they are breaking the law,” the source told the newspaper.
Describing the power plant as “too hot to handle,” the source accused Taipower decisionmakers of “hiding the loss as an ongoing construction” and “leaving the problem for their successors,” the paper reported.
This entire project has been a disaster.
It was started, stopped, and started again.
Years of litigation with a contractor, political infighting and the discovery of indigenous artefacts on the site have repeatedly interfered with the project until it was finally abandoned and the fuel rods shipped back to the US.
By one estimate it was 91% complete when finally shut down.
Having planned for it to come online, for a couple of years Taiwan’s reserve margins were low, and early in President Tsai’s term the power supply actually shut down briefly.
Opponents to the plant note that Taipower doesn’t have a very good safety record, and the Fukushima disaster in Japan heightened safety concerns.
Taiwan is very seismically active, and a potential target for tsunami.

A new Taiwan Foundation for Democracy poll shows some interesting shifts in party support.
The DPP remains the most popular party, with 30.6 percent support.
That’s down 1.3 percent from November, which is essentially flat and roughly in the margin of error.
The KMT, however, plunged 4.5 percent to just 16.7 percent support.
What could be behind the drop?
Two possibilities: this is an outlying poll, or the KMT’s antics recently are turning people off.
Throwing pig guts in the legislature over the lifting of the ban on importation of pork with traces of ractopamine comes to mind.
It also suggests that the KMT’s attempts to use racto-pork as a wedge issue against the DPP isn’t working.
In spite of polling showing a majority of Taiwanese are against the lifting of the ban–which this poll showed 62.5 percent opposing–it clearly isn’t translating into support for the KMT.
This low showing in the polls is also very bad news for KMT chair Johnny Chiang and his reform agenda.
It’s clearly not translating into increased support for the party, which leaves him increasingly exposed in the runup to the next party chair election in August.
As things stand, it looks like former chair Eric Chu is the most likely next party chair–though if popular New Taipei Mayor Hou Yu-ih throws his hat into the ring, he’d have a strong chance.
Another possibility is that former President Ma Ying-jeou may make a run for the post.
He’s been quite active politically recently, though I’m unsure if that is to keep his base active so he retains influence in the party, or if he intends to return to the ring as party chair.
Traditionally, the KMT party chair is the presumptive presidential candidate.
The next party chair will win a four-year term, and if the party does reasonably well in the local elections in 2022 and isn’t forced to retire to over a bad result, this person will be the party chair in 2023 and 2024, when the next presidential primaries and election will be held.
What’s also interesting about the poll is that third parties showed increasing support.
The Taiwan People’s Party (TPP) saw a sharp 5.1 percent jump.
That suggests that this isn’t an outlying poll, because people abandoning the KMT would most likely migrate to the TPP.
The TPP was also against lifting the ban on racto-pork, but were disdainful of the KMT’s tactics.
It’s possible the issue helped the TPP, which took a more rational approach.
The TPP nows has 14.2 percent support, only 2.5 percent lower than the KMT.
That sounds like the TPP could be competitive against the KMT in the next local elections in 2022.
That’s possible, but in practice the KMT has some serious advantages over the TPP.
The KMT has a lot more politicians with name recognition, personal networks and experience.
Outside of the major cities, the KMT also has the support of most of the local patronage factions–though they aren’t as powerful as they once were, they can still sway a few percentage points in an election.
If the TPP can poach more experienced politicians from the major parties, and it can get to work building up news ones between now and then, however, the TPP may become a serious player–but it’s still an uphill battle.
They’ve got two years to get it done, though.
The New Power Party (NPP) got a 1.1 percent bump, to 7.1 support.
The Taiwan Statebuilding Party (TSP) saw a .6 percent bump to 5 percent support.
Both of those parties, which are strongly pro-Taiwan sovereignty, combined has support approaching both the TPP and the KMT.
They won’t merge, but it’s possible they could cooperate by not running competing candidates.
The category labelled “other parties” also saw growth of .7 percent, to 2.9 percent.
The poll also showed satisfaction with President Tsai has slid to 52.8 percent, which is pretty high–but a far cry from the 65.8 percent she had in August and the 71.2 she had in May.
The poll showed the president retains support in other areas, including 56 percent who supported her handling of cross-strait relations over the last year, 60 approved of her handling of foreign affairs and 75 percent her handling of the pandemic.

In 2020, the Chinese military violated Taiwan’s Air Defense Identification Zone (ADIZ) more times than in any year since 1996, with the majority–380–observed in the southwest corner of the ADIZ.
Taiwan spent over US$1 billion flying sorties in response.
There are three theories about what China is up to.
One is test Taiwan’s responses and capabilities.
Another is to wear down the Taiwanese airforce, forcing frequent repairs, wearing out pilots and forcing funds that might have gone elsewhere to cover this.
There is also likely an intimidation and propaganda element to this, trying to create the image that China could easily take Taiwan and can act with impunity.
That’s for the PRC domestic audience as well as for Taiwanese, but also could be aimed at deterring the US and Japan from coming to Taiwan’s aid should war break out.
By the way, 1996 was during the Third Taiwan Strait Crisis when the PLA was lobbing missiles off the coast in response to Taiwan’s first free presidential election and a visit by President Lee Tung-hui to his alma mater, Cornell University.
It was a scary time, with people stocking up on canned goods, rice and water–including me.
Turns out Lee knew all along that the missiles weren’t armed. 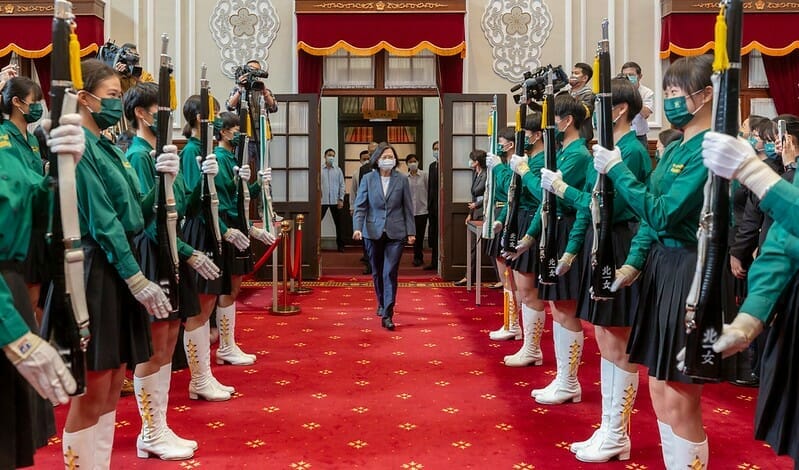