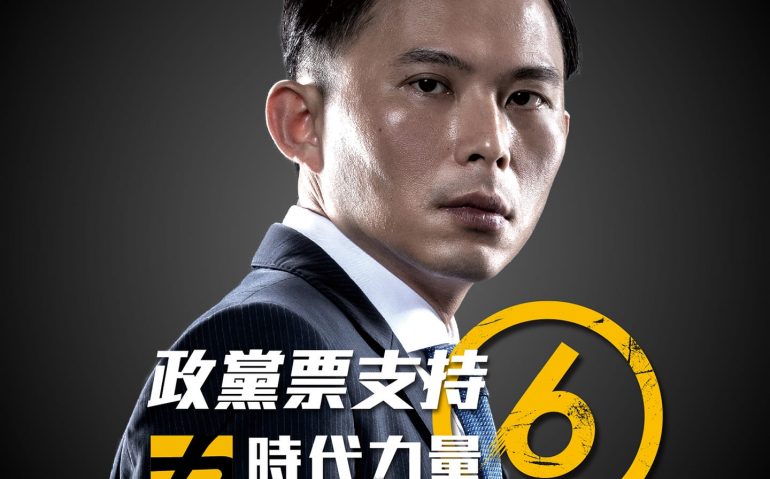 Summary: A memorial held has been held for Hau Pei-tsun, the anti-foreigner, hardline KMT former premier. Then it’s chaos in the NPP and the view from the TSP. The now-ratified US Democratic Party platform is more pro-Taiwan than before. And finally, Trump again speaks on Taiwan

Tainan Mayor Huang Wei-cher (黃偉哲) on Monday received the city’s first mask violation ticket after removing his face covering during an indoor ceremony to take pictures.
Earlier this month, Huang announced that a compulsory mask-wearing policy will be enacted once again in all indoor spaces as a response to the country’s increased number of imported coronavirus cases.
Well, that’s embarrassing.

Vice President William Lai (賴清德) on Monday issued certificates of exoneration to family members of two individuals who were unjustly convicted during Taiwan’s Martial Law period officially wiping out their criminal records.
Lai presented the certificates to the sons of Tu Hsiao-sheng (杜孝生), an indigenous Tsou tribesman, and Liao Li-chuan (廖麗川), who were wrongfully sentenced in 1954 to 17 and 10 years in prison, respectively, for their involvement in a treason case involving indigenous leaders Tang Shou-jen (湯守仁) and Kao Yi-sheng (高一生), who were fighting for autonomy for indigenous people in the Alishan area at that time.

The Ministry of Transportation and Communications (MOTC) said that it will assess whether to dismantle and rebuild the 40-year-old Terminal 1 at Taiwan Taoyuan International Airport, when it completes the construction of a third terminal.
Terminal 1, which opened in 1979, was renovated and expanded in 2010, after which its annual passenger volume increased from 12 million to 15 million, according to the MOTC.
When I first arrived in Taiwan, there was only the one very grey, Stalinist looking Terminal at what was then called Chiang Kai-shek International Airport.
They did a good job making it look better in the 1990s.

Executive Yuan officials on Saturday urged the Legislative Yuan to prioritize the government’s budget proposals for a special relief package, the third-phase of the Forward-looking Infrastructure Development Program and the 2021 fiscal year in its upcoming session.
The Executive Yuan on Aug. 13 approved the government budget for next year, with NT$2.16 trillion in expenditure and NT$2.45 trillion in revenue, as well as approving NT$230 billion for the Forward-looking program for next year and 2022.
Meanwhile, the abolishment of the Control Yuan and Examination Yuan would likely be discussed in the upcoming session, while first cross-caucus discussion on required constitutional amendments are soon to be held.

On Sunday Taiwan President Tsai Ing-wen (蔡英文) posted on her Twitter feed an image of Paraguayan President Mario “Marito” Abdo Benitez sporting a Taiwan special forces Apache helicopter pilot jacket and appearing to deliberately turn his right shoulder to reveal the Taiwan flag patch.
In the caption, Tsai thanked Abdo for promoting Taiwan-Paraguay friendship and complimented him on the jacket.
The jacket was gifted from Tsai to Abdo in 2018.

Senior members of the KMT on Sunday attended a memorial service in Taipei for late former premier Hau Pei-tsun (郝柏村), who died on March 30 at the age of 100.
Hau, was the nation’s top general, was appointed premier by President Lee Tung-hui early in his presidency to keep hardliners on his side.
I remember clearly hearing reporting on ICRT about him giving a speech attacking foreigners as being here to destroy Chinese culture among other charges.
The speech was the launch of a major crackdown on English teachers, who at the time were almost all illegal because the process of becoming legal was nearly impossible.
A lot of friends of mine got kicked out of the country, but I was pretty safe–my employer was politically connected.
A lot of Chinese of his generation hated foreigners, a legacy of the foreign concessions in China.
The generation of KMTers after his was considerably more friendly to foreigners, in part due to the support provided by the US.

Chaos in the NPP and the view from the TSP

The New Power Party (NPP) appears to be in chaos.
This ran in the Taiwan News:
Miaoli County Councilor Tseng Wen-hsueh (曾玟學) announced Sunday that he was leaving the New Power Party (NPP) after its former chairman Huang Kuo-chang (黃國昌) was heard questioning Tseng’s abilities in a leaked audio recording.
After NPP leader Hsu Yung-ming (徐永明) gave up his party membership over the Sogo bribery case earlier this month, the party said it would hold a primary election to determine the new members of the decision-making committee.
However, audio in which Huang suggested Tseng stood no chance of winning the primary without his support was published Sunday by a Facebook user who described the election as rigged and accused Huang of exercising dictatorial authority within the party.
In the leaked audio, Huang was heard bashing Tseng for being full of himself and having delusions about his abilities.
He also said Tseng could not possibly win the party primary by himself, reported New Talk.
On Sunday evening, Tseng took to Facebook to announce his decision to quit the party and become an independent.
He said he was aware of Huang’s influence among NPP members and that he could no longer stand the former chairman’s resistance to opposing voices.
Tseng said he had given the NPP his heart and soul and that he was disappointed in the party for abandoning its original ideals.
He also expressed hope that it would one day overcome its struggles and become a beacon of hope for young Taiwanese voters, reported CNA.
Upon hearing of Tseng’s departure later that evening, Huang said that he was surprised by the news.
He said he had not meant to cause internal conflict within the party and emphasized that the audio had been edited to fit the political agenda of “certain parties.”
From Chinese language media I got more details, including that acting chair Chiu Hsien-chih (邱顯智) basically begged him to stay, but failed.
Tseng was quoted in another report as saying “no one dares defy Huang Kuo-chang.”
Starting last year in August, the party has been hemorrhaging elected politicians and key people, with all of them becoming independents.
The party is falling apart.
But for me, one big question came to mind: Why didn’t any of them join the Taiwan Statebuilding Party (TSP)?
They are supported by a similar demographic, and share many ideals.
It would be a big boost to the TSP to pick up more elected lawmakers.
Plus, the NPP defections have been concentrated in the north, where their power base is.
The TSP power base is in the south, so this would give them exposure further north where they are weak.
I had some guesses, but now I have some answers.
I had the good fortune to meet up over beers with noted Asia expert, academic and nice guy Bill Sharp when he was passing through Taichung.
This topic came up in conversation, and it turned out the very next morning he was going to Kaohsiung to meet the TSP chairman Chen Yi-chi (陳奕齊).
So, he got a chance to pose this question directly to him.
Chen told him that he hadn’t personally reached out to any of the NPP defectors, though some in his party had.
He said that he thought the problem with the NPP was it was full of individualists, presumably meaning competing egos.
He said the TSP was concentrating on building a party team spirit.
This makes some sense.
In Taipei, the activists and campaigners that parties like the Greens, Social Democratic Party and the NPP draw from are a pretty incestuous bunch.
They go to the same events, the same rallies, attend the same seminars, hang out at the same cafes and so share an entrenched culture.
Being based in Kaohsiung gives them more of a chance to build a new culture and new approaches.
They can avoid the infighting and politics of the Taipei scene.

The Democratic Party platform adopted at last week’s nominating convention dropped any reference to the U.S. policy of recognizing a single China in reference to Taiwan.
The new platform issued for presidential nominee Joseph R. Biden on Thursday states that Democrats are committed to the 1979 Taiwan Relations Act, which calls upon the U.S. to defend Taiwan from mainland attack.
The platform then states that Democrats “will continue to support a peaceful resolution of cross-strait issues consistent with the wishes and best interests of the people of Taiwan.”
By contrast, the 2016 platform explicitly supported the “One China” policy hammered out in the 1970s, when the U.S. dropped formal diplomatic recognition of Taiwan and shifted recognition to Beijing.
The 2016 document said Democrats were “committed to a ‘One China‘ policy.”
This shift is both a very big deal, and not at all.
Symbolically, it is significant that it both dropped the reference to “One China” and states Taiwan’s status is “with the wishes and best interests of the people of Taiwan,” with the wishes of the Chinese people removed from the equation.
However, presidents don’t usually pay the slightest bit of attention to the party platform once in office.
In a totally surprising move, China’s Foreign Ministry criticized the platform change.
Just kidding, no surprise there.
The Democratic platform also takes a tougher tone on China than in the past but also calls for more moderate policies than President Trump has pursued.
The platform also states that a Democratic administration would support activists in Hong Kong with sanctions.
It also condemned China’s placement of more than 1 million ethnic Uighurs and other minorities in “concentration camps.”
“Democrats will pursue this strategy without resorting to self-defeating, unilateral tariff wars or falling into the trap of a new Cold War,” the platform says.
“Those mistakes would only serve to exaggerate China’s weight, over-militarize our policy, and hurt American workers.”

US President Donald Trump has spoken again on Taiwan.
This is how it was reported in the Taiwan News:
Fox News’ Steve Hilton, host of “The Next Revolution,” brought up the topic of the U.S.’ relationship with Taiwan, wanting to get Trump’s reaction on the issue.
Hilton said that in the past there have been different attitudes toward Taiwan from the U.S. government and it seems to be “getting more important because of technology and economic aspects that a company in Taiwan is a world leader in semiconductors.”
Trump chimed in, saying, “It’s coming to this country.”
Hilton then asked, “If China, and it looks like it’s getting more belligerent, tries to either invade Taiwan or effectively take control of it and its important industries, would you let them get away with it?”
“I think it’s an inappropriate place to talk about it, but China knows what I’m gonna do.
China knows,” Trump replied.
“I think this is an inappropriate way to talk about it.
You know. I don’t want to say I am gonna do this or I am not gonna do this.
This is just an inappropriate place to talk about it.”
“It is a very big subject.
It is a very powerful subject, but I think China understands what I am gonna be doing,” Trump said.
So, in short, he stuck with the US stance going back for several administrations of “strategic ambiguity” where the US refuses to say one way or the other what it would do.
Secretary of State Mike Pompeo said something similar the other day.

Vice: If Taiwan Calls, Will Biden Answer? A Pro-Trump Democracy Braces for Uncertainty